(CNN) – This Memorial Day, we have a look at one World War II veteran's life-long mission. Leon Cooper says that mission is to pay tribute to Americans who gave their lives in service to their country. Our John Roberts sat down with Cooper to discuss his wartime experience and his project, "A Return to Tarawa."

(CNN) – New York City's police force is made of about 34,500 men and women, all putting their lives on the line to protect one of the busiest cities in the world. A select few make up the city's bomb squad and our Susan Candiotti has been given unprecedented access to talk with them, including those who were called in on May 1st during the Times Square bomb scare.

(CNN) – Many people along the Gulf are now looking to a higher power as they lose faith in the federal government. But not all of them are praying for BP to go away. Ironically, the company may be the only thing they have left when this is over. Our Carol Costello has the report.

BP reports 'some success' in stopping oil leak in Gulf 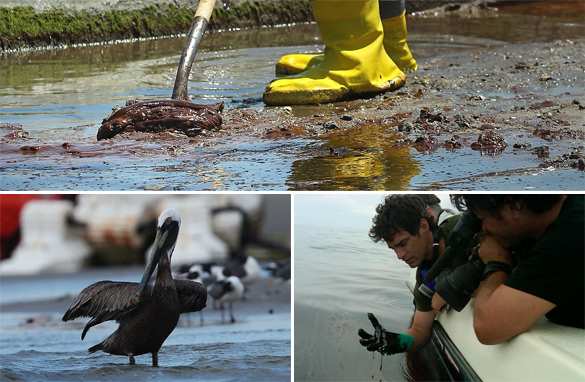 (CNN) – BP has measured "some success" in the Gulf of Mexico with a risky procedure known as "top kill," which has never been tried before a mile under the ocean's surface, the company's top executive said Friday.

The oil flow stopped when heavy drilling mud was being pumped into the well at high pressure, but it was too early to tell whether the operation will be able to permanently keep oil from gushing out, said Tony Hayward, BP's chief executive officer. The oil giant plans to resume pumping mud later Friday.

"Clearly, while we're pumping mud there is no oil and gas coming into the sea," Hayward said. A live video feed from the ocean floor showed a thick brown stream gushing into the water. That material was almost all nontoxic, water-based mud - not oil - he said. Read more

(CNN) – It may be years before we know the full extent of damage from the Gulf oil spill. There's no doubt the impact on fish, wildlife and the environment has been devastating. So, can this coast recover? Doug Inkley is a senior scientist with the National Wildlife Federation and has been monitoring the spill and cleanup efforts. He joined us on Friday's American Morning to give us his assessment.

(CNN) – Memorial Day weekend is the unofficial start of summer, but you wouldn't know it from looking at the beaches of Grand Isle, Louisiana. Normally, they would be packed with tourists, but this year no one's swimming or visiting, and that's putting local businesses at risk. Rhea Pelotto manages the Barataria restaurant and she joined us on Friday's American Morning to explain how the oil spill has impacted her business.