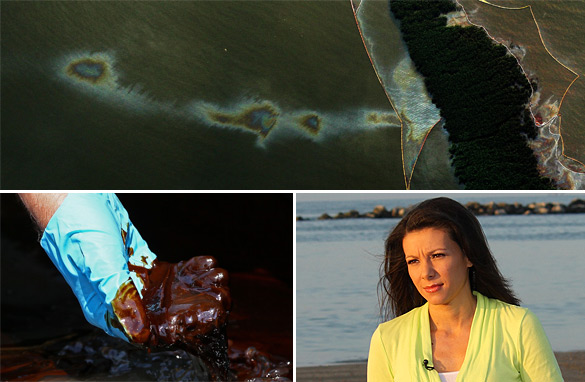 (CNN) – The Gulf of Mexico undersea gusher has already spilled more oil than the Exxon Valdez disaster - possibly more than twice as much, making it the largest oil spill in U.S. history - government scientists said Thursday.

Scientists observed 130,000 to 270,000 barrels of oil on the water's surface on May 17, and think a similar amount had already been burned, skimmed, dispersed or evaporated.

Full coverage | Track the spill | Should military take over in Gulf Coast?

(CNN) – BP's "top kill" procedure is going as planned and according to expectations, U.S. Coast Guard Adm. Thad Allen, the government's point man in the Gulf of Mexico oil spill response, said Thursday. Even if the well is sealed shut today, it's still millions of gallons too late. Bob Dudley is BP's managing director and he joined us live on Thursday's American Morning.

Should military take over in Gulf Coast?

(CNN) – Legally, President Barack Obama can effectively fire BP and have the federal government take over efforts to stop the Gulf of Mexico oil spill. The question is whether that would help the situation.

No one argues that the Oil Pollution Act of 1990 gives Obama the authority to take over all efforts to plug the gushing well 5,000 feet beneath the surface. However, officials of oil giant BP, while acknowledging their failure so far to stop the leak, say no one – even the U.S. government – can match their company's know-how and technology in such a crisis.

So, what are military officials saying? Our Pentagon correspondent Barbara Starr joined us on Thursday's American Morning with the latest.

(CNN) – For the first time since the Gulf Coast oil spill people are starting to complain that it is making them sick. Yesterday, some of the local fishermen helping with the cleanup complained of nausea, headaches and chest pains. The Coast Guard decided to pull them off the water. On Thursday's American Morning, we were joined by our Dr. Sanjay Gupta to get an idea of how safe it is to breathe the air with all that oil around.

Honoré: 'Time is not on our side'

(CNN) – The federal government and President Obama are starting to take a lot of heat for letting BP call all the shots in the Gulf Coast. CNN contributor Lt. Gen. Russel Honoré joined us on Thursday's American Morning where he said the federal government should maximize their capabilities in dealing with the oil spill.