Building Up America: Floridian trying to make the best of oil crisis

(CNN) – The full impact on the environment from the Gulf oil disaster is still impossible to know. But with all the worry and heartache, some people think this crisis could bring out the best in people in the region. Our Tom Foreman talked to one-such optimist for today's "Building up America" report.

The gambling man who co-founded Apple and left for $800

(CNN) – Ron Wayne is usually just another gambler at the Nugget Hotel & Casino in Nevada. He comes here a couple of days a week to try his luck on the video poker machine. But on this trip, he drew some curious onlookers, as he was escorted by a CNN camera crew. A gift-shop worker asked him if he's famous.

"Well, I'm one of the founders of Apple Computer," Wayne responded.

Wayne, 76, is used to the puzzled looks. He said people assume that he must be living in a mansion.

"I'm living off my Social Security and I do a modest trade in collectors' stamps and coins," he said.

The irony of being inside a casino is not lost on Wayne. After all, if his short-lived career at Apple had gone differently, he would be holding a different kind of winnings: 10 percent of Apple's stock.

Today, that stock would be worth $22 billion. Wayne left Apple for only $800. Read more

(CNN) – The mothers of U.S. hikers held by Iran said a magazine article that contradicts government claims they crossed the border before their arrests is "concerning" and raises many questions.

The article written for the July 12 edition of The Nation cites two witnesses who said they saw members of Iran's national police force cross the border into northern Iraq to apprehend Shane Bauer, Sarah Shourd and Josh Fattal.

"The witnesses, who followed the Western-looking hikers out of curiosity, say that around 2 p.m. on July 31 (2009), as the hikers descended the mountain, uniformed guards from NAJA, Iran's national police force, waved the hikers toward the Iranian side using 'threatening' and 'menacing' gestures," the article says.

"When their calls were ignored, one officer fired a round into the air. As the hikers continued to hesitate, the guards walked a few yards into Iraqi territory, where they lack jurisdiction, and apprehended them," according to the article. Read more

Were hikers seized in Iraq, not Iran? 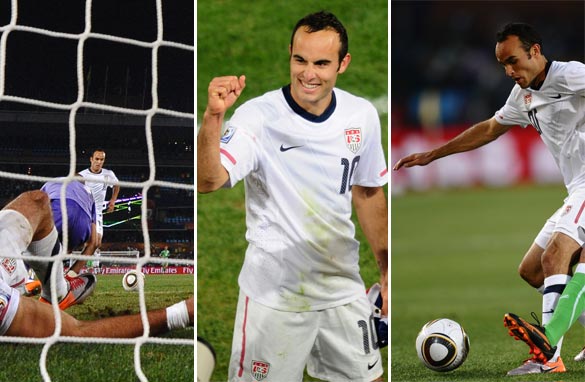 (CNN) – If Americans don't embrace soccer now, they surely never will. That's because Team USA's heart-stopping win at the World Cup yesterday was one of those rare defining moments in sports. Just a minute or so from elimination, in a game that would have been remembered for so many missed opportunities, the United States struck! America's most celebrated player, Landon Donovan, gave us what is perhaps our greatest soccer moment ever. He joined us on Thursday's American Morning to talk about his winning goal against Algeria. Watch

(CNN) – Americans have experienced their share of large scale environmental disasters. A few stand out:

Today, we have the Deepwater Horizon oil spill, which may prove to be even worse than its predecessors. While they are loathe to say it, some environmentalists wonder if this is the disaster that finally persuades Americans that the environment is important enough to change the way we live our lives.

Will this disaster, as big as it is, give birth to something as groundbreaking as Earth Day? Or the Clean Air Act?

One movement, "Hands Across the Sand,” is banking on it. Back in February, it drew 10,000 Floridians to join hands on clean beaches to protest offshore oil drilling—and that was BEFORE the Deepwater Horizon exploded.

This weekend, "Hands" says it is going international. 599 American cities will take part along with 20 nations.

David Rauschkolb is the founder of “Hands Across the Sand.” He told us it’s “a huge opportunity for us and it's time that we take control of our energy future.” Watch

END_OF_DOCUMENT_TOKEN_TO_BE_REPLACED

[cnn-photo-caption image= http://i2.cdn.turner.com/cnn/2010/images/06/24/obama.two.gi.art.jpg caption="Lawmakers praise the choice of Petraeus and say Obama had no choice but to accept McChrystal's resignation."]

(CNN) – President Barack Obama on Wednesday replaced Gen. Stanley McChrystal as commander of U.S. and allied forces in Afghanistan and nominated Gen. David Petraeus to replace him while affirming support for a counterinsurgency strategy encountering problems.

The dramatic shift came a day after McChrystal's disparaging comments about America's civilian leadership surfaced, and reignited the national debate on the war in Afghanistan - now in its eighth year with a June death toll of coalition forces that is close to becoming the highest of the war.

It was a stunning reversal of fortune as the U.S. soccer team came roaring back to life with only seconds to spare, beating Algeria 1 to 0 yesterday. America's greatest player, Landon Donovan, is the heart and soul of the team and he'll be joining us live this morning.