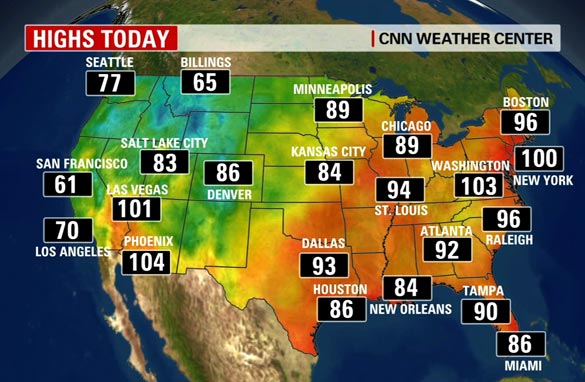 (CNN) – The mercury is rising across the country, especially along the eastern seaboard. The National Weather Service is warning of a dangerous situation as temperatures approach and shoot past 100 degrees. In places like the nation's capital and New York City, cooling centers and water stations will be open to the public. For some, it may be just a nuisance. But for others, especially the young, the elderly and the poor, the heat could be deadly. Our Jim Acosta reports. Watch

Get your weather forecast | A heat wave of historic proportions could strike some Northeastern states as forecasters warn of prolonged triple-digit temperatures that could trigger "a dangerous situation," the National Weather Service advised Monday.

Excessive heat advisories have been issued for the Philadelphia metropolitan area until Wednesday evening, and in New York City, a heat advisory is in effect from to 2 p.m. Monday until 6 p.m. Tuesday as high humidity levels and high temperatures linger for two consecutive days, the Weather Service reported.

The increase in humidity, matched by weather patterns, may force the Weather Service to issue additional heat advisories for central New Jersey, northeastern Maryland and central and southern Delaware.

The Weather Service advised people affected by the heat to "drink plenty of fluids," stay out of the sun and in air-conditioned rooms, and to check up on relatives and neighbors.

A heat wave is considered to be a stretch of more than 90-degree temperatures.

Tuesday is expected to be the hottest day of the stretch, with highs ranging from 100 to 102 degrees and heat index values up to 106, the Weather Service warned.

According to the Weather Service, in the 40-year period from 1936 through 1975, nearly 20,000 people were killed in the United States by the effects of heat and solar radiation. And in the heat wave of 1980, more than 1,250 people died, the Weather Service said.

1:18 pm ET September 22, 2020 RETWEET
@PlatoPox I am so sorry. I wish that you can reach deep and summon the strength you need to get through this. It maŌĆtwitter.com/i/web/status/1ŌĆ”Gc
alivelshi

11:53 am ET September 22, 2020 RETWEET
RT @jchatterleyCNN: Shock absorber needed! The #Fed did its part to help, now it's time for Congress to pick up the heavy lifting says @CŌĆ”
christineromans

9:27 am ET September 22, 2020 RETWEET
Today is #NationalVoterRegistrationDay. Our guide from @NBCNews & @MSNBC helps you know deadlines to vote, eligibilŌĆtwitter.com/i/web/status/1ŌĆ”5q
alivelshi

9:12 am ET September 22, 2020 RETWEET
Coming up on Ō@firstmoveveŌü® to talk markets, stimulus and recovery. https://t.co/6iZG6iqEqK
christineromans

9:01 am ET September 22, 2020 RETWEET
My kiddos watched Elf this weekend! Barreling our way through 2020... twitter.com/SavannahGuthriŌĆ”
christineromans