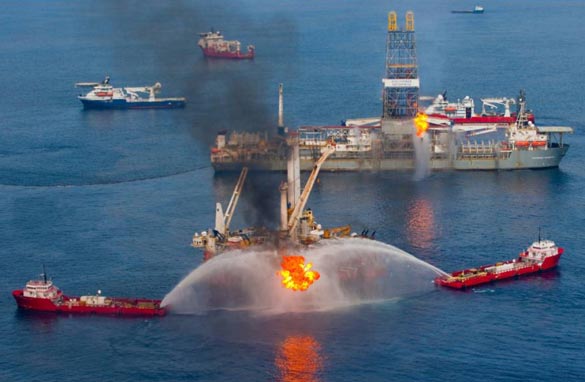 The Helix Producer I will join two other contracting services vessels owned by Helix, the Express and Q4000, in supporting BP on the Deepwater Horizon spill response and containment operations. (Courtesy: Helix Energy Solutions Group)

(CNN) – There's a new plan to dramatically increase the amount of oil BP is recovering from its gushing well in the Gulf. The company has brought in a new vessel, the Helix Producer I. It's a floating platform that's able to process as much as 25,000 barrels a day. The system is also designed to easily disconnect and reconnect in the event of a major storm. Owen Kratz is CEO of Helix Energy Solutions Group and he joined us on Tuesday's American Morning to discuss their efforts. Watch

A massive, silver-colored blimp is expected to arrive in the Gulf Coast Tuesday to aid in oil disaster response efforts.

The U.S. Navy airship will be used to detect oil, direct skimming ships and look for wildlife that may be threatened by oil, the Coast Guard said Monday.

The 178-foot-long blimp, known as the MZ-3A, can carry a crew of up to 10. It will fly slowly over the region to track where the oil is flowing and how it is coming ashore.

The Navy says the advantage of the blimp over current helicopter surveillance operations is that it can stay aloft longer, with lower fuel costs, and can survey a wider area.

The Coast Guard has already been pinpointing traveling pools of oil from the sky.

"The aircraft get on top of the oil. They can identify what type of oil it is and they can vector in the skimmer vessels right to the spot," Coast Guard Capt. Brian Kelley said.

But the problem since last Wednesday has been the ability to clean it up before it approaches land.

Rough seas have hampered cleanup efforts and tests by the boat - called A Whale - billed as the world's largest skimmer.

Tests of A Whale's ability so far are "inconclusive," meaning the massive converted oil tanker–which is 3.5 football fields long - has yet to prove its Taiwanese owner's claim that it can skim between 15,000 and 50,000 barrels of oil off the sea in a day.

The Coast Guard said the testing period for the A Whale has been extended through Thursday.

So far, crude oil floating in the sea has not been concentrated enough for A Whale to skim effectively, according to oil company BP, even though it appears the ship has been surrounded by pools of oil just a few miles from the gusher.

"We've got oil coming up from over a mile below the surface. And it doesn't always come up in one spot. It's not always predictable. So, in fact, we need to locate the oil first, and then assign the ship to the areas of heaviest concentration," BP spokesman Hank Garcia said.

"When you've got 6-foot, 8-foot seas, it's not going to lend itself to good capture of the oil."

The Coast Guard reported over the weekend that a shift in weather patterns could send more oil toward sensitive shores in Mississippi and Louisiana, and bad weather over the past few days has significantly hampered cleanup efforts.

Anne Rheams, executive director of the Lake Pontchartrain Basin Foundation, said Monday that the pattern was expected to persist for at least three more days.

The National Hurricane Center said early Tuesday morning that a low-pressure area located near the Louisiana coast was producing a few showers and thunderstorms, but it was not likely to develop into a tropical cyclone in the next 48 hours.

Federal estimates say between 35,000 and 60,000 barrels (about 1.5 million to 2.5 million gallons) of oil have been gushing into the Gulf daily since April 22, when the Deepwater Horizon oil rig sank in the Gulf, two days after it exploded in flames.

The accident left 11 workers dead and uncorked an undersea gusher that BP has been unable to cap for 11 weeks.

RT @AliVelshi: At least 15,000 people are dead in Italy. Stuart @ramsaysky of @SkyNews goes to Bergamo, the hardest hit city in the hardestâ€¦
alivelshi

7:13 pm ET April 5, 2020 RETWEET
There has been little consensus during this crisis, but there is agreement on one point: this week will be tough. Sâ€twitter.com/i/web/status/1â€¦Ej
alivelshi