BP: Relief well may be ready by end of July 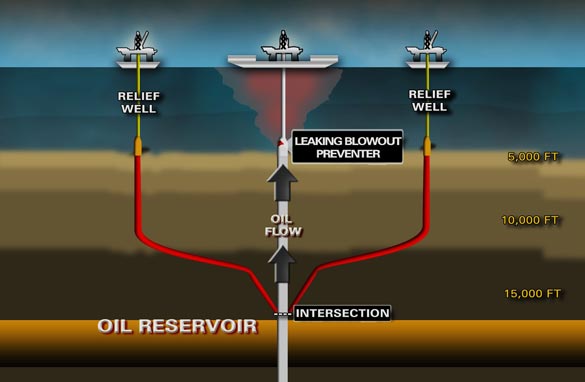 (CNN) – After 79 days and an estimated 190 million gallons of gushing oil, BP says it's "ahead of schedule" and it may have the first relief well drilled by the end of the month. It's believed to be the company's best hope to stop the biggest oil disaster in U.S. history. But now, there is talk of backups to the backup plan. Gene Beck is an associate professor of petroleum engineering at Texas A&M and has more than 25 years of experience in well design and operation. He joined us on Wednesday's American Morning to walk us through the process of drilling a relief well. Watch

Crews are in the process of connecting the vessel Helix Producer to the ruptured oil well in the Gulf of Mexico, said the man leading the federal response to the Gulf oil disaster. The hookup has been partially completed despite rough seas.

The vessel should draw up to 53,000 barrels of oil a day when it becomes operational, newly retired Coast Guard Adm. Thad Allen said Tuesday afternoon in Houston, where he traveled to meet with BP officials. He also said progress continues to be made on two relief wells.

Despite rough weather in the Gulf of Mexico, Allen believes that the placement of a new containment cap and the deployment of key air and sea resources will eventually stop the massive amounts of oil now gushing from the well.

Once the Helix Producer is fully connected to the well and operational, officials will decide within 10 days whether to proceed with replacing the containment cap, Allen said.

Federal estimates say between 35,000 and 60,000 barrels (about 1.5 million to 2.5 million gallons) of oil have been gushing into the Gulf daily since April 22, when the Deepwater Horizon oil rig sank in the Gulf, two days after it exploded in flames.

Allen is meeting with BP in Houston about several "significant" developments. "You can't be successful if you can't coordinate, collaborate and integrate together," he said.

Allen told CNN earlier Tuesday that officials will be monitoring weather patterns to determine if and when they would try to install the cap, a process that will involve unbolting the jagged edge that exists on the structure now. Once completed, the new containment cap, he said, will achieve a perfect seal and keep oil from escaping.

Another tool in the effort to contain and stop the oil flow is a relief well that is "very close" to being completed, Allen told CNN, guessing it will be ready sometime in early or mid-August. Over the next week, relief well rig workers will drill 100 feet at a time until they can intercept the wellbore at just the right place, he added.

In early June, during an exclusive 48-hour embed with Allen, CNN's Kyra Phillips visited the site of the oil disaster and gained access to the Development Driller III - the rig that is drilling the primary relief well some 16,000 to 18,000 feet below the sea floor.

"The intention is to intercept the wellbore, well down below the surface near the reservoir, then pump heavy mud in to counteract the pressure of the oil coming up," he told her. "That will allow them to basically plug or kill the well. Once that's done, you could do things like remove the blowout preventer, bring it to the surface and try to find out what happened."

Also, a massive airship, or blimp, and a ship that can suck oil out of the ruptured well are expected to arrive in the Gulf region at the end of the week to aid in oil disaster response efforts. Their arrival is being delayed because of rough weather, said Stephanie Hebert, spokeswoman for the cleanup effort.

The U.S. Navy airship will be used to detect oil, direct skimming ships and look for wildlife that may be threatened by oil, the Coast Guard says. It had been scheduled to reach the Gulf on Tuesday. The 178-foot-long blimp, known as the MZ-3A, can carry a crew of up to 10. It will fly slowly over the region to track where the oil is flowing and how it is coming ashore.

The Navy says the advantage of the blimp over current helicopter surveillance operations is that it can stay aloft longer, with lower fuel costs, and can survey a wider area.

The Coast Guard has already been pinpointing traveling pools of oil from the sky.

"The aircraft get on top of the oil. They can identify what type of oil it is and they can vector in the skimmer vessels right to the spot," Coast Guard Capt. Brian Kelley said.

But the problem since last Wednesday has been the ability to clean it up before it approaches land. Bad weather has made that task more difficult.

Poor conditions also canceled a boat tour for BP Chief Operating Officer Doug Suttles, although he did manage to meet with workers.

Suttles said improvements have been made in cleanup operations. "The program will more effectively deploy boats to oil recovery activity and better utilize local commercial and charter fishing vessels to advance the effectiveness of the Gulf of Mexico response."

Meanwhile, Bob Grantham, spokesman for TMT Offshore Group, said progress has been made in testing the company's A Whale oil skimmer, the world's largest.

The delay from high seas "has allowed us to make valuable observations and to develop some additional technological innovations designed to improve the channeling of oily water into the ship's large capacity tanks," Grantham said in a statement issued Tuesday. "Over the next few days, we will have our first real opportunity to test the new technology under conditions that we hope will maximize the effectiveness of collection and ultimately decanting."

Earlier, officials said A Whale's abilities so far are "inconclusive," meaning the massive converted oil tanker - which is 3.5 football fields long - has yet to prove its Taiwanese owner's claim that it can skim between 15,000 and 50,000 barrels of oil off the sea in a day.

The Coast Guard said the testing period for the A Whale has been extended through Thursday.

So far, crude oil floating in the sea has not been concentrated enough for A Whale to skim effectively, according to oil company BP, even though it appears the ship has been surrounded by pools of oil just a few miles from the gusher.

"We've got oil coming up from over a mile below the surface. And it doesn't always come up in one spot. It's not always predictable. So, in fact, we need to locate the oil first, and then assign the ship to the areas of heaviest concentration," BP spokesman Hank Garcia said.

Bad weather has hindered cleanup efforts, he said. "When you've got 6-foot, 8-foot seas, it's not going to lend itself to good capture of the oil."

The Coast Guard reported over the weekend that a shift in weather patterns could send more oil toward sensitive shores in Mississippi and Louisiana, and bad weather over the past few days has significantly hampered cleanup efforts.

Anne Rheams, executive director of the Lake Pontchartrain Basin Foundation, said Monday that the pattern was expected to persist for at least three more days.

The National Hurricane Center said Tuesday afternoon that a low-pressure area located near Mexico's Yucatan Peninsula in the southern Gulf of Mexico was producing showers and thunderstorms, but it was not likely to develop into a tropical cyclone in the next 48 hours. A system that had hovered over the Louisiana coast Tuesday morning moved inland.