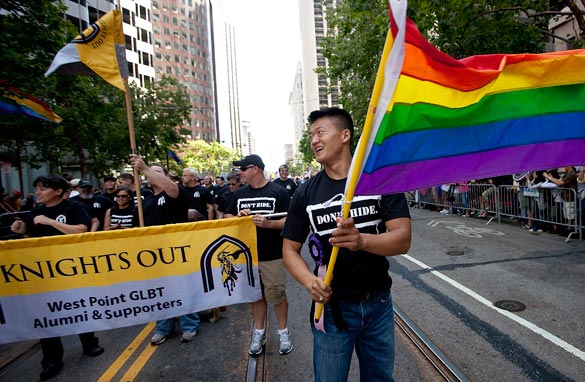 (CNN) – The Pentagon on Wednesday began sending out to troops a survey of more than 100 questions seeking their views on the impact of repealing the "don't ask, don't tell" restrictions prohibiting gays and lesbians from openly serving in the U.S. military. An administration official confirmed to CNN that the survey is being sent to 200,000 active duty troops and 200,000 reserve troops. The official declined to be identified because the survey has not officially been made public. Our Pentagon correspondent Barbara Starr breaks it down for us. Watch

The survey, which service members can expect to receive via e-mail, asks about such issues as how unit morale or readiness might be affected if a commander is believed to be gay or lesbian; the need to maintain personal standards of conduct; and how repeal might affect willingness to serve in the military.

The survey also asks a number of questions aimed at identifying problems that could occur when troops live and work in close quarters in overseas war zones. For example, the questionnaire asks military members how they would react if they had to share a room, bathrooms, and open-bay showers in a war zone with other service members believed to be gay or lesbian.

There also are several questions about reactions to dealing with same-sex partners in social situations.

The Pentagon established a team to conduct the survey earlier this year. President Barack Obama, Defense Secretary Robert Gates, and Joint Chiefs of Staff Chairman Adm. Mike Mullen have all publicly backed a repeal of the current policy. Defense Department officials insist the survey is aimed at determining the impact of a repeal - not whether repeal should happen.

Several members of the Joint Chiefs of Staff have said they want to see the results of the survey before they offer their final advice on the impact of a repeal to Obama and Gates.

In May, the House of Representatives approved a plan that would repeal the "don't ask, don't tell" policy after the military's internal review is completed and Obama, Gates, and Mullen to sign off on the policy change. The Senate, however, did not pass the measure.

According to a senior U.S. military official with direct knowledge of the review process, the military needs until the end of 2010 to figure out how to implement a repeal of "don't ask, don't tell" in terms of housing, medical and marriage benefits, as well as issues involving the reinstatement of gay soldiers previously discharged under the policy.

A major problem might be determining how to reconcile the repeal of "don't ask, don't tell" with federal law that defines marriage as between a man a woman, the official said.

In addition to distributing the survey, the Pentagon has also been soliciting opinions in a number of private meetings with troops.

The results of the review will not be available until December, the official said.

2:29 am ET February 21, 2020 RETWEET
So essentially how my car smells on a weekend of boys’ soccer tournaments? Hard passtwitter.com/janicedean/sta…fo
christineromans

5:21 pm ET February 20, 2020 RETWEET
RT @oneunderscore__: The test also shows a "Community Reports" feature for disinformation. This could include "points" that would heavily…
alivelshi