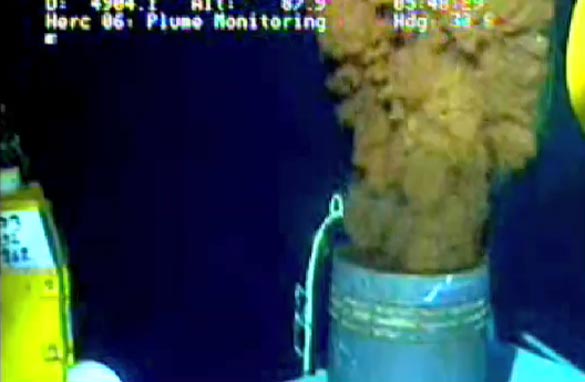 Oil gushes from the ruptured well in the Gulf of Mexico July 14, 2010 (Courtesy BP).

(CNN) – BP was reviewing testing procedures Wednesday, a day after government and company officials decided to delay a crucial "integrity test" on the ruptured oil well in the Gulf of Mexico.

The oil giant had expected the test - to check pressure in the well and determine if it can be sealed once and for all by a custom-designed cap - to get under way Tuesday afternoon.

But late Tuesday night, officials announced that additional analysis of the well testing procedure was needed. The move followed a meeting with Energy Secretary Steven Chu and his team of advisers, and the decision was made by the Deepwater Horizon Unified Command, which includes government agencies as well as BP.

The decision to delay testing was made at about 4:30 p.m. Tuesday after officials decided they needed an additional 24 hours to make sure the test will go as planned, Kent Wells, BP senior vice president, told reporters Wednesday. CNN's David Mattingly reports. Watch

A source informed about BP operations told CNN's John King that, "There were some potential complications that might cause a delay - some bad, some in the 'better to be safe than sorry' category."

CNN's David Mattingly, who accompanied the Coast Guard out to a site over the ruptured well Tuesday, said Wednesday a "small city of vessels" remains at the site and continues combating the sheen of oil in Gulf waters as smoke from burning gas and oil hovers on the horizon.

It had been hoped that the integrity test would show whether an end is in sight to the environmental disaster that has been unfolding for the last 12 weeks. But throughout the evening, cameras some 5,000 feet below the surface showed oil gushing from the well's capping stack, indicating that valves had not been closed to begin the pressure test. Some of the oil, however, is being siphoned. BP said more than 17,000 barrels (714,000 gallons) was collected Tuesday.

The massive cap, which has a better seal than the last cap placed on the well, is some 30 feet high and weighs 160,000 pounds. It's hoped that it might seal the well completely. Under a worst-case scenario, however, the test might show there's more damage to the well's casing, meaning that capping the well would not stop the oil from flowing. If it's unable to contain all the oil, some could be diverted through riser pipes to ships on the surface.

Retired Adm. Thad Allen, who is leading the federal response to the oil disaster, says the well cap placement is part of a "very complex, nuanced and broad-based response" to the rupture of the underwater well in April. The disaster, the worst environmental incident in U.S. history, was triggered April 20, when the underwater rig Deepwater Horizon exploded and then sank two days later. Eleven workers were killed.

When the integrity test takes place, it will measure pressure inside the well and is expected to last anywhere from six to 48 hours. The test involves incrementally closing three valves on the new cap, a process that would allow BP to do its pressure measurements.

Higher pressure readings would mean the leak is being stopped, while lower pressure indications would mean oil is escaping from other parts of the well.

"In this exercise, high pressure is good," Allen said. "We are looking for somewhere between 8- and 9,000 psi (pounds per square inch) inside the capping stack, which would indicate to us that the hydrocarbons are being forced up and the well bore's being able to withstand that pressure."

Allen was asked what he thought the odds were to the success of being able to shut the well with the new cap.

"I think we are very confident we can take control of this hydrocarbon stream and then slowly close all these valves and stop the emission of hydrocarbons. What we can't tell is the current condition of the well bore below the sea floor and the implication of the pressure readings," he said. "That is, in fact, why we're doing a well integrity test."

But officials want to ensure that if they can't build up pressure readings, they are able to pinpoint where the pressure is being relieved, Wells said Wednesday.

"As much as we want to do things as soon as possible, we also want to make sure things are absolutely correct," Wells said.

Meanwhile, work on two relief wells - seen as the ultimate solution to the oil disaster - was suspended.

Wells said work on the first relief well, expected to be completed in August, was delayed while officials prepare for the integrity test out of an abundance of caution. It is possible, though unlikely, that shutting in the well as part of the integrity test could cause the back side of the relief well to be blown out, Wells said.

"It's a good precaution to take at this time," he said. However, the delay will set the relief well progress back by one to two days.

Operations on the second relief well were temporarily suspended at a depth of 15,963 feet to ensure there is no interference with the first relief well, BP has said.

The latest containment cap, while seeming to offer the best odds of success, wasn't ready earlier. In addition, BP officials have said the company has learned from previous, unsuccessful containment efforts.

Allen said that if low pressure readings persist for around a six-hour time frame, that could signal problems with the new cap.

If it's determined that the cap can't seal the well completely, and some crude must be sent to the surface, the oil-gathering ship, the Helix Producer, is now in place. On Monday it joined the Q4000, which was already active. And more vessels are planned; Allen said a four-vessel system that could recover up to 80,000 barrels (3.3 million gallons) a day could be ready by the end of the month.

Wells said the Helix Producer is ramping up production and recovered about 9,200 barrels (386,400 gallons) on Tuesday.

Meanwhile, in another development Tuesday, the Obama administration sent BP and other responsible parties a fourth bill relating to the oil spill. The new bill is for $99.7 million. It comes on top of a total of $122.3 million in the first three bills.

The government says the parties are responsible for all costs associated with the spill, including stopping the leak, protecting the shoreline and long-term recovery efforts. The money will help replenish a $1.5 billion federal trust fund established to pay for damages associated with oil spills.

Among those costs is skimming oil on the surface of the Gulf. Allen said authorities are on pace to have around 1,000 skimmers available by the end of the month. At this point, there are fewer than 600.

Scientists estimate that 35,000 to 60,000 barrels (1.4 to 2.5 million gallons) of oil have spewed daily from BP's breached well. Allen cautions that even if the engineering containment efforts work, there is still a lot to be done in a disaster that has affected the environment and the livelihoods of people from Louisiana to Florida.

"There's still a significant amount of oil out there, and the oil recovery and the impacts of this oil will probably extend well into the fall in terms of oil coming ashore, tar balls, beach cleanup, and then we will be moving of course at that point of the natural resources damage assessment trying to understand the long-term environmental ecological impact of the event," Allen said.

And the presidential commission tasked with investigating the Gulf oil gusher and making recommendations about the future of offshore drilling continued its public meetings Tuesday. The National Oil Spill Commission has six months to determine what happened when the rig exploded - and how to prevent something similar from ever happening again.

A new moratorium on deepwater drilling issued by the U.S. Interior Department Monday has already played a prominent role in the hearings.

CNN's Jamie Morrison and Vivian Kuo contributed to this report.