Haass: U.S. should draw down in Afghanistan 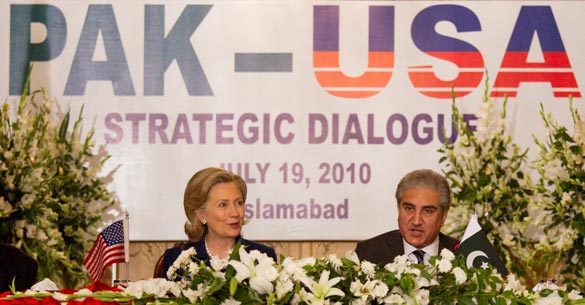 (CNN) – Secretary of State Hillary Clinton is in Pakistan right now. She's just unveiled $7.5 billion in development aid aimed at winning some hearts and minds. That's part of the White House's strategy for turning things around across the border in Afghanistan where Clinton's headed next.

One of the most respected voices among US foreign policy experts says the Obama Administration’s Afghan policy is not working.

Richard Haass, President of the Council on Foreign Relations and a veteran of several US administrations, writes in the latest edition of Newsweek: “Continued or increased U.S. involvement in Afghanistan isn’t likely to yield lasting improvements that would be commensurate in any way with the investment of American blood and treasure. It is time to scale down our ambitions there and both reduce and redirect what we do.”

Speaking on CNN’s American Morning Monday, Haass said Afghanistan was now “a sponge for American resources and it is a distraction. We out to be thinking militarily about what we might have to do in North Korea or Iran where we really do have vital national interests.” Watch

He added the scale of the mission in Afghanistan now amounted to nation-building. “The Taliban, maybe 30, 40-thousand of them that they're going after , and this represents to some extent half the population of Afghanistan,” he said.

Haass proposed a much more targeted counter-terrorism approach – of the sort that was attributed to Vice-President Biden in recent internal discussions at the White House on Afghanistan. “We could have done in Afghanistan essentially what we're doing in places like Yemen and Somalia,” Haass said.

“We don't have 100,000 troops in those countries. We've got a few special forces there. We can target those terrorists or people who are supporting terrorists with drones, cruise missiles, special forces.”

“The Taliban share the same [Pashtun] ethnicity of half the population of Afghanistan. So Mr. Obama has essentially made the United States now a central participant in Afghanistan's civil war,’ Haass said.

A recent study by the respected Afghanistan Analysts Network argued that the Taliban’s influence and appeal extended well beyond Afghanistan’s Pashtun heartland.

Haass suggested a different approach to Afghanistan should include working directly with local leaders – bypassing the government in Kabul – and providing them weapons. President Hamid Karzai has resisted arming local militia, fearing it will revive “warlordism.”

He also suggested essentially a “truce” with the Taliban, allowing them control or influence over certain parts of the country if they renounce al Qaeda.

But Haass supported the Administration’s focus on Pakistan.

“Pakistan has more than 100 nuclear weapons; it's host to the world's most dangerous terrorist organizations, he said. “The last thing we want is for Pakistan to go from a fragile state – which it is now – to a failed state. The United States is right to make sure Pakistan does not unravel.”

U.S. Secretary of State Hillary Clinton announced in Islamabad Monday a major trade and aid package for Pakistan, which will focus on developing its energy sector. The country is plagued by power shortages.