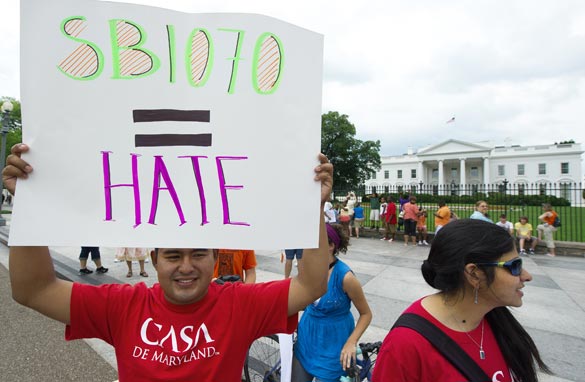 (CNN) – A federal judge in Arizona will hear arguments today in two lawsuits challenging the state's controversial new law targeting illegal immigrants, including one brought by the Obama Justice Department. Arizona's law is set to take effect next week and supporters say it's a response to the federal government's failure to secure the southern borders. The feds say the borders are more secure than ever. Could both sides be right? Our Casey Wiann takes a look. Watch

END_OF_DOCUMENT_TOKEN_TO_BE_REPLACED

After her father was shot to death by a white man, ''I decided to stay in the South and work for change,'' Shirley Sherrod said.

(CNN) – Shirley Miller Sherrod has spent most of her life fighting injustice.

On the night in 1965 when her father, Hosie Miller, a black man and a deacon at Thankful Baptist Church, was shot to death by a white farmer in what ostensibly was a dispute over a few cows, Sherrod - then 17 years old - changed her mind.

"I decided to stay in the South and work for change," said Sherrod, now 62, who believes her father's killing was more about a Southern black man speaking up to a white man than about who owned which animals. The all-white grand jury didn't bring charges against the shooter. Read more

Agriculture Secretary Tom Vilsack says he has apologized to Sherrod, who resigned from her Agriculture Department position under pressure this week over a video showing her making comments about a white farmer.

Vilsack said he told Sherrod by phone that the USDA would have another position for her should she want it. Sherrod answered that she needed some time to think about it, Vilsack said.

Program note: Will Shirley Sherrod reconsider working again for the USDA? She'll join us live in the studio this morning at 6:30 a.m. ET.