Plane with 152 on board crashes in Pakistan; no survivors 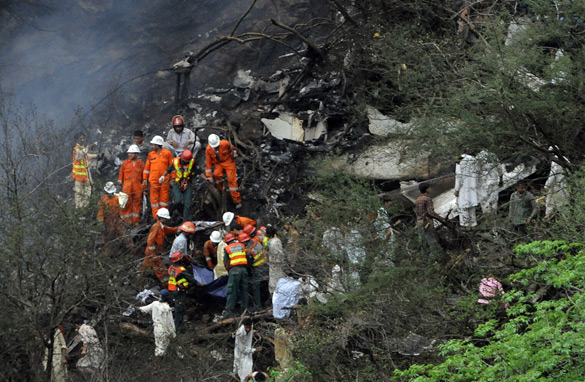 Pakistani rescuers search for bodies in the wreckage of a plane crash on the outskirts of Islamabad on July 28, 2010. (Getty Images)

Islamabad, Pakistan (CNN) – No one survived the crash of a Pakistani passenger plane that went down in the outskirts of the capital Islamabad Wednesday morning with 152 people on board, officials said.

Rescuers worked in heavy rains to recover bodies from the wreckage, as officials launched an investigation to determine why the accident occurred.

Crews combing through the debris have recovered a so-called "black box" - which is actually orange - that is either the craft's flight data recorder or cockpit voice recorder, according to Wajid Shamsul Hasan, Pakistan's ambassador to the United Kingdom. Information from the recorder will help authorities determine the cause of the tragedy.

@JoeBanner13 Also what 6 wars were launched priot to 1948 when much sovereign Palestinian land was confiscated by Israel?
alivelshi

10:24 pm ET August 14, 2020 RETWEET
RT @CapehartJ: “Once my absentee ballot arrives, I’m going to complete it, drive to the elections office, put on a mask, go inside, and han…
alivelshi

9:49 pm ET August 14, 2020 RETWEET
RT @dog_feelings: i actually look forward to seeing the mailman. because a long time ago. they brought me my stuffed fren sebastian. and i…
alivelshi