(CNN) – An Islamic center and mosque just a few steps from Ground Zero is now one step closer to reality. New York City's landmarks preservation commission denied landmark status for the property in question, handing a victory to supporters of a plan that opponents call a slap in the face to America. In a surprising move, the Anti-Defamation League, an organization that promotes religious tolerance, has come out against the Islamic center. Abraham Foxman, the group's national director, joined us on Thursday's American Morning to explain their position.

(CNN) – Some Republicans want to open up a new front in the immigration fight. They're calling for hearings on repealing the 14th Amendment, which grants citizenship to any child born in the United States. They say it has outlived its usefulness, arguing it was meant for the children of slaves but is now being used by illegal immigrants to obtain U.S. citizenship for their children. The White House is calling it a political ploy. Jonathan Turley, law professor at George Washington University, and Republican strategist Leslie Sanchez joined us on Wednesday's American Morning to discuss the issue. 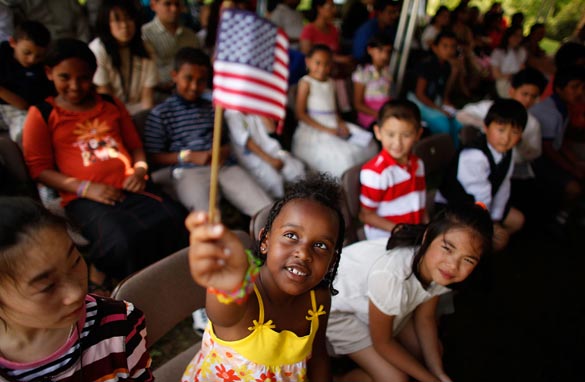 Six-year-old Rahel Williams holds up a flag during a ceremony where she and 24 other children became U.S. citizens on May 21, 2010 in Chantilly, Virginia. (Photo by Chip Somodevilla/Getty Images)

(CNN) – The Obama administration took Arizona to court to block the most controversial provisions of the state's new immigration law. Now, another state may be in the cross-hairs. Virginia's attorney general, Ken Cuccinelli, issued a legal opinion yesterday that authorizes police to check the immigration status of anyone they stop for legitimate reasons. He joined us on Wednesday's American Morning to discuss how his opinion would be applied. Watch 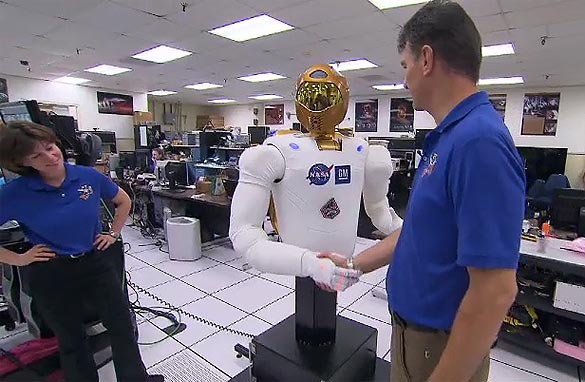 (CNN) – How about this for proof that the future is now: NASA's newest astronaut is a robot with its own Twitter account. The space agency is planning on sending Robonaut 2, or "R2" for short, up to join the crew of the International Space Station in November. NASA hopes it'll take over some of the routine tasks on board. Our John Zarrella got a chance to meet R2 in this CNN exclusive report. Watch

Islamic center to be built near Ground Zero

(CNN) – A New York City preservation commission has cleared the way for an Islamic center and mosque to be built just blocks from Ground Zero. That's after the panel voted against protecting an abandoned building that's standing in the way of the project.

The commissioners voted unanimously against landmark status for 45-47 Park Place. It and an adjoining building already connected on the inside, 49-51 Park Place, are owned by real estate developer Soho Properties, which intends to build the Islamic center two blocks north of the former site of the World Trade Center.

Backers of the center say they plan to use it to promote interfaith understanding, but critics don't buy it and have vowed to sue the city. Our Jason Carroll reports on the heated and passionate debate. Watch