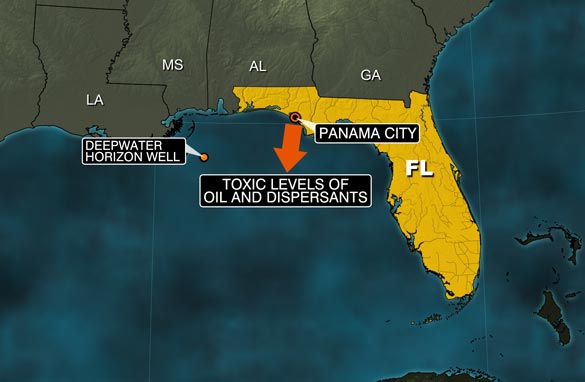 University of South Florida researchers have discovered oil on the ocean floor 40 miles south of Panama City beach. They say it sparkles like "a constellation of little dots," when it's hit by ultra-violet light and that the chemical mix of oil and dispersant is highly-toxic to marine life. 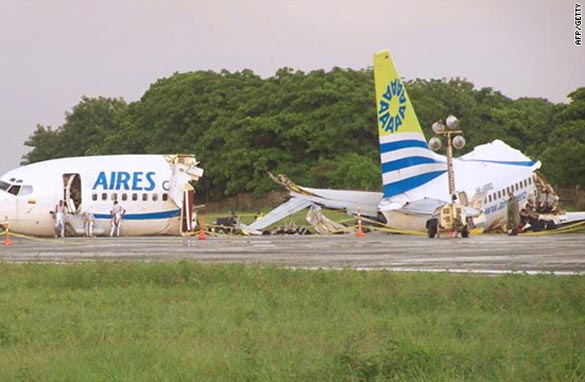 Retired pilot, Jim Tilmon, says a violent wind shift is more likely the cause of a Colombian crash that tore apart a plane. Watch

Bogota, Colombia (CNN) - One passenger was killed after an airplane crashed in bad weather and broke apart while attempting to land early Monday on the island of San Andres, Colombia, officials said.

National police said 124 people were injured, many of them scattered on the darkened runway when emergency personnel arrived in the predawn hours. Six people, including an 18-month-old boy, were not injured, the national police said.

Some of the patients are in critical condition, said Robert Sanchez, director of Hospital Amor de Patria.

END_OF_DOCUMENT_TOKEN_TO_BE_REPLACED

University of South Florida researchers have discovered that oil from BP's 205-million gallon spill is spreading along the floor of the gulf. They say the dispersant BP used broke it up into tiny droplets and it sank to the ocean floor and now it's threatening critical marine animals that are the building blocks of the ocean's food chain. Larry McKinney, head of Texas A&M's Harte research institute for Gulf of Mexico studies, spoke with CNN's American Morning Tuesday.

(CNN) - A new report set to be released Tuesday renews concerns about the long-term environmental impact of the Gulf Coast oil disaster, and efforts to permanently plug the ruptured BP oil well have been delayed again.

Researchers at the University of South Florida have concluded that oil from the Deepwater Horizon spill may have settled to the bottom of the Gulf of Mexico further east than previously suspected - and at levels toxic to marine life.

Initial findings from a new survey of the Gulf conclude that dispersants may have sent droplets of crude to the ocean floor, where it has turned up at the bottom of an undersea canyon within 40 miles of the Florida Panhandle. The results are scheduled to be released Tuesday, but CNN obtained a summary of the initial conclusions Monday night.

Plankton and other organisms at the base of the food chain showed a "strong toxic response" to the crude, and the oil could well up onto the continental shelf and resurface later, according to researchers.

"The dispersant is moving the oil down out of the surface and into the deeper waters, where it can affect phytoplankton and other marine life," said John Paul, a marine microbiologist at USF. Read More

A world without overdraft

While banks worried about losing revenue have been aggressively promoting "opt-in" overdraft plans, many customers are choosing to risk having their card declined rather than face a $35 overdraft fee.

But being unable to pay for your purchases can not only be embarrassing, it can sometimes deprive you of basic needs.

There are several ways to avoid getting declined. The simplest one: Don't overdraft your account in the first place.

But that's easier said than done in today's world of electronic banking. With direct deposit, debit cards, check writing and automatic payment plans for monthly bills, keeping track of your balance is harder than ever.

"The best thing you can do is focus on the available balance rather than the overall balance," said Greg McBride, a senior financial analyst at Bankrate.com. "But even then not everything clears at the same time so you've got to try to keep track of your transactions on your own to be safe."

So if you're not entirely certain how much money you have available, how can you avoid getting turned away at the cash register? Read More