Public Discipline: how far is too far?

Millions Waiting for Aid How to help Pakistan 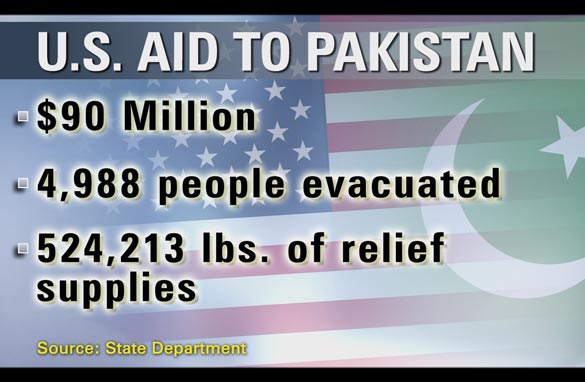 The COO for Save the Children talks to CNN about efforts to provide aid for flood victims in Pakistan. Watch

Many Pakistani streets and valleys are submerged in water, and in some areas you can't tell where the waterways end and the flooding begins. In other locales, most of the structures are simple gone. Monsoon rains left about one-fifth of the country underwater, and children and adults wade through the filthy aftermath pleading for help. Read more

Chicago, Illinois (CNN) - The jury in the federal corruption trial of former Illinois Gov. Rod Blagojevich was one vote short of convicting him of attempting to sell a U.S. Senate seat. Prosecutors have already said they will retry Blagojevich and will meet next week to plot their next move.

Blagojevich was found guilty Tuesday of lying to the FBI, but escaped convictions on 23 other counts in a trial seen as a partial victory for the former governor.

The jury, which deliberated for 14 days, said it was hung on 23 counts against him and on the counts against the former governor's brother, Robert Blagojevich.

The former governor faced charges including racketeering, wire fraud, attempted extortion and bribery. The two-term Democrat was removed from office in January 2009 amid accusations that he attempted to sell the U.S. Senate seat occupied by Barack Obama before he was elected president.

Juror Erik Sarnello, 21, told CNN affiliate WLS in Chicago the final vote on whether to convict the former governor of attempting to sell the seat was 11 in favor and 1 against.

"She obviously didn't see it," he said about the holdout. "Some things were so obvious to me."

The next court date is set for August 26, though prosecutors said they will try the case again. Read more

Share your thoughts: Should the planned Islamic center be moved?

Los Angeles, California (CNN) - Embattled radio talk show host Dr. Laura Schlessinger announced Tuesday she will not renew her contract that is up at the end of the year, telling CNN's "Larry King Live" she wants to "regain my First Amendment rights."

Schlessinger, 63, has been under fire for using the N-word repeatedly during an on-air conversation with a caller last week.

In announcing her decision "not to do radio anymore" after being in the business for more than 30 years, Schlessinger said, "I want to be able to say what's on my mind and in my heart and what I think is helpful and useful without somebody getting angry or some special-interest group deciding this is a time to silence a voice of dissent."

National furor erupted when Schlessinger used the N-word 11 times in five minutes during a call August 10 with an African-American caller who was seeking advice on how to deal with racist comments from her white husband's friends and relatives. The conversation evolved into a discussion on whether it's appropriate to ever use the word, with Schlessinger arguing it's used on HBO and by black comedians.

Schlessinger apologized the following day, saying "I was attempting to make a philosophical point, and I articulated the N-word all the way out - more than one time. And that was wrong. I'll say it again - that was wrong."