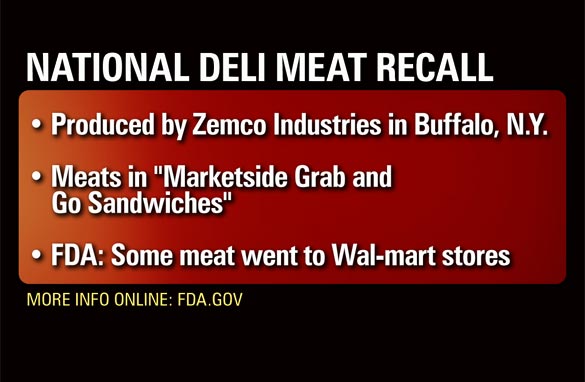 (CNN) - Zemco Industries in Buffalo, New York, has recalled approximately 380,000 pounds of deli meat that may be contaminated with bacteria that can cause a potentially fatal disease, the U.S. Department of Agriculture announced Monday.

The products were distributed to Wal-Marts nationwide, according to the USDA's website.

The meats may be contaminated with Listeria monocytogenes, which was discovered in a retail sample collected by inspectors in Georgia. The USDA has received no reports of illnesses associated with the meats.

"Consumption of food contaminated with Listeria monocytogenes can cause listeriosis, an uncommon but potentially fatal disease," according to the USDA. "Healthy people rarely contract listeriosis. However, listeriosis can cause high fever, severe headache, neck stiffness and nausea.

"Listeriosis can also cause miscarriages and stillbirths, as well as serious and sometimes fatal infections in those with weakened immune systems, such as infants, the elderly and persons with HIV infection or undergoing chemotherapy," the USDA said.

The products subject to recall are:

Wal-Mart noted the recall involves Marketside Grab and Go sandwiches, but not individual packages of deli meat. "We encourage customers who recently purchased this item to return it for a full refund," the company statement said.