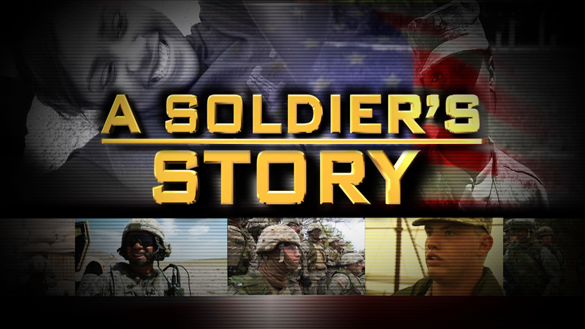 "A Soldier's Story" is an original series by CNN's "American Morning" that tracks three military recruits from their final days as civilians through deployment.

Our Jason Carroll has been given unprecedented access by the Pentagon as President Barack Obama outlines a new strategy for the war in Afghanistan.

For a sneak peek, check out:

[cnn-photo-caption image= http://i2.cdn.turner.com/cnn/2010/images/03/31/latricia.rose.soldiers.story.cnn.art.jpg caption="Wife and mother Latricia Rose is headed off to basic training in the Army."]

About: Latricia Rose and her husband Brandon live in Columbus, Georgia with their 2-year-old daughter Ayona. After high school, Latricia had thoughts of nursing school, but early motherhood and marriage put those plans on hold. Brandon struggled to find work and Latricia's earnings supported the family. Now she's off to the Army for basic training. Latricia's mother saw college in her daughter's future and worries that Latricia's separation from her daughter may be too much to handle.

[cnn-photo-caption image= http://i2.cdn.turner.com/cnn/2009/images/12/04/will.mclain.cnn.art.jpg caption="It's off to the Army for Will McLain, a high school football player who traded the gridiron to be all he can be."]

About: Will McLain was a high school football player who dreamed of the pros. Realizing there are bigger fish in the sea, he decided to enlist in the Army. He tried to convince his parents to allow him to enlist at 17, but they made him wait so that the decision would be his alone. Will says he's glad to be leaving his small hometown, but admits there will be things he will miss. Follow Will's story from civilian to soldier below.

[cnn-photo-caption image=http://i2.cdn.turner.com/cnn/2010/images/12/14/shorter.profile.jpg caption="Sgt. Randy Shorter on the base in Sharana, Afghanistan."]

About: Randy Shorter lives in Ft. Campbell, Ky, with his wife Sheryll and two daughters, Maylanie and Ariana. We meet Sgt. Shorter as he is preparing for his third combat tour of duty, this time to one of the most dangerous regions of Afghanistan– the Paktika Province. He was in the region two years ago when his unit hit a roadside bomb and insurgents opened fire. Shorter rescued the wounded while returning fire and earned the Silver Star for bravery. Watch as Jason Carroll travels with Sgt. Shorter to the area dubbed "Hell on Earth."

Coming soon: Watch CNN's "American Morning" this week for previews of the documentary, and check back here for updates to their stories.

RT @GasBuddyGuy: Average US #gasprices currently stand at $4.016 per gallon. We're less than 24 hours away from the national average fallinâ€¦
christineromans

8:57 pm ET August 7, 2022 RETWEET
A lot to unpack here: from your planet to your car to your drug and healthcare costs to a new set of windows and anâ€twitter.com/i/web/status/1â€¦Yl
christineromans

3:57 pm ET August 7, 2022 RETWEET
Back from vacation in Vacationland and the Garden State does not disappoint. (And that jobs report?! Whoa. Economicâ€twitter.com/i/web/status/1â€¦MY
christineromans

7:43 pm ET August 6, 2022 RETWEET
Carefully tipping back into the news flow after a week in Maine. OMG THAT JOBS REPORT!
christineromans