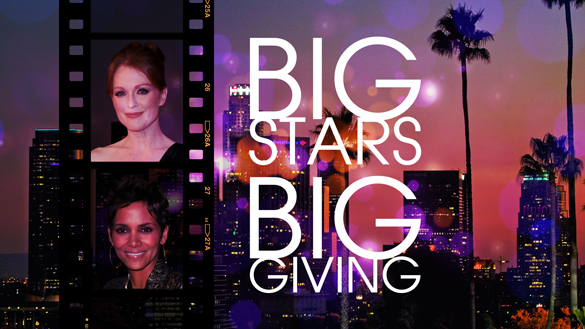 “Big Stars, Big Giving” is a CNN special series for "American Morning" and one-hour network special aimed at shining a spotlight on celebrities and the causes they support.

The series will launch on “American Morning” the week of December 13th, 2010. The one-hour special debuts December 24th and airs again on December 25th.

Justin Bieber is the hottest music star on the planet right now. Just 16 years old, he already has philanthropy on his mind.

He's even getting his fans in on helping others. One dollar of every Justin Bieber concert ticket sold goes to Pencils of Promise, a charity that builds schools in third-world countries.

Also, proceeds from his latest CD, "My Worlds Acoustic" will benefit the Children’s Miracle Network.

For more information on how you can help the organizations close to Justin Bieber's heart, visit:
Wish.org
Childrensmiraclenetwork.org
Pencilsofpromise.org

Julianne Moore is an artist ambassador for Save the Children. Growing up an “army brat,” Moore lived in various locations around the country and saw firsthand the inequality that exists in education.

An avid reader, she also recognizes the important of literacy. To that end, Moore – a children’s author herself – travels to rural areas to read to children.

She is committed to fighting poverty in the US – where one in five children live below the poverty level.

To find out more about fundraising and doing more to help others, visit Savethechildren.org.

Edward Norton is a longtime advocate for various causes, so much so that he is cited in this year's Barron’s "Top 25 Givers" alongside Bill and Melinda Gates – the ONLY celebrity on the list.

Norton's latest project is Crowdrise, what he calls the "Facebook of philanthropy." Crowdrise is an innovative new web platform that brings the fun of social networking to fundraising and volunteerism.

Like Foursquare, members can earn points and win prizes when they reach certain fundraising benchmarks. "We've created a fun and easy way for people to raise money for the causes they care about," Norton says. He is particularly interested in inspiring a new generation of givers.

To find out more about Crowdrise's fundraising efforts, visit Crowdrise.com.

Halle Berry may be best known for her work in "Monster's Ball" and "Introducing Dorothy Dandridge," but she's also a passionate advocate for victims of domestic violence.

Berry is currently donating her time and money toward rebuilding rundown apartments at the shelter so women who flee their abusive partners have a clean and happy place of refuge.

To find out more about the Jenesse Center or to make a donation, visit Jenesse.org If you live in the Los Angeles area and need help from an abusive situation, call the Jenesse Center at 1800-479-7328. For help outside the L.A. area, call the National Domestic Violence hotline at 1800-799-7233.

Nicole Kidman is a longtime goodwill ambassador for UNIFEM, the United Nations arm that fights for gender equality and to end violence against women.

Kidman was moved to act after her mother heard a report on the radio about a UNIFEM program in Cambodia. She says she was raised to be a feminist.

"A lot of my life, I've been trying to please my mother," she says. "This is probably the thing she most responds to in my life."

To get involved or read more about the U.N.'s "Trust Fund to End Violence Against Women," visit Unifem.org/untfevaw or in the U.S., text UNITE to 27722 to donate $10 to the fund.