Independence in Africa: A new beginning for embattled Sudan?

It is the most important global story in the world right now and chances are... you aren't paying attention to it. Africa's largest nation, Sudan, has been war torn for almost the entirety of its post colonial history. Factions in the northern and southern regions of the country have been clashing for years and the south may soon be on the verge of taking an historic step towards independence.

Kristof joins American Morning today to explain the situation in Sudan and clarify why a secession of the South would be an optimistic future for the region.

Interviewing the president is always a difficult prospect. There are so many questions you want to ask, but you only have a limited amount of time.

We had been told we might get about 15 to 20 minutes sitting down with the president and then perhaps 10 minutes walking around Cape Coast Castle – a whitewashed fort through which enslaved Africans were sent to the New World.

We arrived in Ghana last week, one day before the president arrived with his family. We spent the day shooting a story about African Americans who visit Ghana to retrace their roots, and we also spent an hour or so walking through the Castle with members of the president’s advance team.

It is a remarkable thing to see how much effort and organization goes into the president’s movements. The Castle and the nearby hotel were full of secret service, embassy personnel, White House advance personnel, military backup and I’m sure more from other agencies as well.

Everything is timed to the minute: When the president will arrive, where he will go, etc. I read something on Drudgereport that said the crowds were not enthusiastic for the president’s trip. I’m not sure where that impression came from. 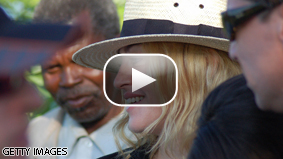 No aid for Africa?

[cnn-photo-caption image= http://i2.cdn.turner.com/cnn/2009/images/03/27/ogunnaike.moya.art.jpg caption="Dambisa Moyo, a Harvard/Oxford-educated economist, says aid to Africa is not a solution."]

For decades, aid and Africa have been inextricably linked, but Dambisa Moyo, a Harvard/Oxford-educated economist wants to change that…immediately.

In her controversial new book “Dead Aid,” she argues that aid to Africa has caused more harm than good. War, poverty, corruption – blame it on aid, she says. At worst it ends up lining the pockets of corrupt political leaders, she says. At best case scenario, it does not do anything productive; it goes to fuel large bureaucracies that do not support entrepreneurship and that primarily choke off any private sector of development.

Cutting off aid won’t hurt most Africans because it never gets to them anyway, she argues. She joins a small number of intellectuals who have, in recent years, posited that too much help has hindered the continent’s growth. And yet, Moyo remains an anomaly: a young African woman, in a world where conversations of this nature are dominated by older, white males.