AT&T will become the largest network in the U.S. after its deal to acquire T-Mobile for $39 billion is finalized next year. How will the deal affect your mobile service and your pocket?

Matt Buchanan is a Reporter for Gizmodo.com. Buchanan tells American Morning what he thinks the deal will mean for consumers.

Fortune Magazine's list of Most Admired Companies was released Thursday morning, with Apple coming in at first place.

Not only did the top spot go to an American company, but so too did the top ten spots. Watch Ali Velshi's interview with Leigh Gallagher, Assistant Managing Editor of Fortune Magazine, to find out if you work for one of the world's most admired companies.

This Halloween, sales are up across the board; but sales of Colonial costumes are beating the spread.

Retailers think it’s the influence of the Tea Party and election-year patriotism, but they’re not asking too many questions as they bring in more revenue from Revolutionary officer uniforms and breeches.

"It’s all about the scallywag hats. People are interested in anything they can get for that look," says Andrew Perry, a Halloween Express franchise owner in Charlottesville, VA. Perry has resorted to looting pieces from his pirate costumes to meet the demand for Colonial-style costumes. The category is doing twice as well for him as it did last year, and the vast majority of his Colonial inventory has already sold.

Perry’s store is not alone. National online retailers CostumeCraze.com and BuyCostumes.com have both seen an increase in sales of about 50 percent for their “Colonial” items in the past two months. In both cases, that represents a bigger rise than they’ve seen in overall sales.

END_OF_DOCUMENT_TOKEN_TO_BE_REPLACED

Santa's comin' to town, with jobs

Looking for a job? American Morning's Christine Romans tells you who's hiring this holiday season, and how you can turn a seasonal gig into a permanent job.

END_OF_DOCUMENT_TOKEN_TO_BE_REPLACED 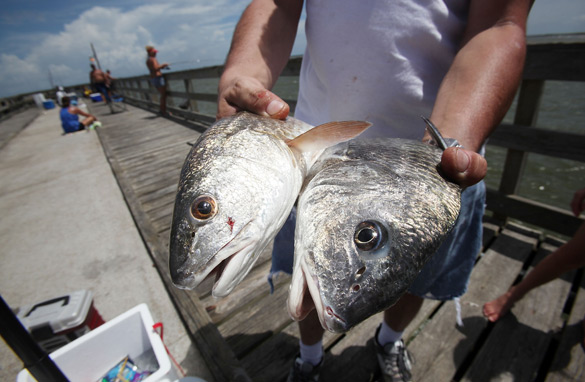 A man poses with fish he caught while sport fishing off a pier in Grand Isle, Louisiana. (Getty Images)

Editor's Note: The sea has lost its lure for hundreds of men and women who make a living off the Gulf of Mexico. Many of them have been idled for months as the BP oil spill keeps thousands of square miles of ocean off-limits to fishing. Last week, a ban on one-third of those waters was lifted. Now, seafood industry officials and Louisiana's governor want the rest of the Gulf reopened. But as our Jim Acosta reports, a lot of fishermen are going to need a little incentive to get them back in the water. Watch

By Jim Acosta and Bonney Kapp

(CNN) – With the oil dissipating faster that expected, Louisiana seafood officials want BP to lure the state's fishermen back to the water.

Many of Louisiana's 12 thousand fishermen have gotten accustomed to serving as cleanup workers since the oil spill began, drawing paychecks from BP instead of from the Gulf of Mexico.

Ewell Smith, executive director of the state's Seafood Promotional and Marketing Board, is asking BP to offer a bonus to fishermen who return to their old jobs.

"It's a commonsense approach to put fishermen back to work to help mitigate claims against them," Smith said.

Under the state's proposed "Back to the Docks" program, BP would pay fishermen an additional 30 cents for every dollar of seafood they catch. Now that BP is closing in on killing the well, company spokesman Larry Thomas said the oil giant is considering Smith's proposal.

END_OF_DOCUMENT_TOKEN_TO_BE_REPLACED

9:05 am ET September 28, 2022 RETWEET
RT @EarlyStart: "It's completely unprecedented that we'd have so many simultaneous demand and supply shocks to the system." The Associati…
christineromans

6:31 am ET September 28, 2022 RETWEET
RT @LaMonicaBuzz: Liz Truss hopes to win one for the Gipper? @NicoleGoodkind has more on how the new UK Prime Minister is trying an economi…
christineromans

8:52 am ET September 27, 2022 RETWEET
RT @EarlyStart: TODAY: U.S. stocks tumbling, the Dow continues to head into a bear market, and the dollar surges while the British pound hi…
christineromans