Live from space – AM's interview with Expedition 27 from the ISS

We have been following Cady Coleman's journey from training to blastoff. She is now 220 miles in space at the International Space Station. Cady and the rest of her space crew speak to American Morning on their mission.

Cady Coleman and her fellow astronaut send greetings to John Zarrella and the American Morning team from Baikonur, Russia.

EDITOR'S NOTE: Over the last year, CNN's John Zarrella has been following mom and NASA Astronaut Cady Coleman as she prepares to launch into space to work on the International Space Station. On Wednesday, Coleman is scheduled to embark on her journey. In her last blog post before lift off, she explains what is racing through her mind as she prepares for her trip. Watch "American Morning" at 6am ET to follow Coleman's progress. Watch the story of Cady Coleman here

I’ll keep this short because there are still a few things that I’d like to pack into my last few hours on the planet until next May, not to mention I’m spending as much time as I can with my husband Josh and my sons Josiah and Jamey, before I go. I’m hoping that the photos attached will tell the story of our final few weeks of training before launch.

Who would have thought that it would all happen so fast? This day was always something that would happen sometime in the future… but I find myself in Baikonur, Russia, preparing to launch on a Soyuz for a six-month mission to the International Space Station (ISS), AND I’m turning 50 today. If this is what “Downhill from Here” means – then bring it on!

I thought I knew what getting ready to launch would be like. As a backup for Expedition 24, I watched the prime crew as they completed all the training that precedes a Soyuz launch. I climbed into their spacecraft for a fit check, took all the last classes, got signed off by the medical and training commissions and was pronounced “Certified for Spaceflight”. If my counterpart on the prime crew couldn’t launch for some reason, then I would go in their place.

Now I’m finding that everything feels different when you are really the NEXT crew to launch. I realize that the prime crew always had a look in their eyes – a kind of wonder and anticipation that can’t be felt by the backups. Not many people get to leave our planet in a spacecraft bound for the International Space Station – and Dmitry Kondratev, Paolo Nespoli and I, the crew of Soyuz TMA 20, are launching in less than 24 hours!

Two weeks ago we flew to Baikonur, Kazakhstan to complete the last phase of our training. We are in quarantine at the Cosmonaut Hotel here. That means that we can’t see anyone who hasn’t had a physical, and we can’t leave. Three great meals a day, it is a cross between prison and paradise! Even family have limited access, which is probably the hardest part of the last few weeks. I’ve tried to put that aside as we completed a busy series of fit checks in the REAL Soyuz and some final classes to review the important points of launching and then working aboard the ISS.

Our families and the backup crew got to watch OUR VERY OWN SOYUZ taken by train out to the launch pad and placed upright in the launch position. Josh likes to joke that arranging a ride to space in the Soyuz was the least he could do for my birthday present! 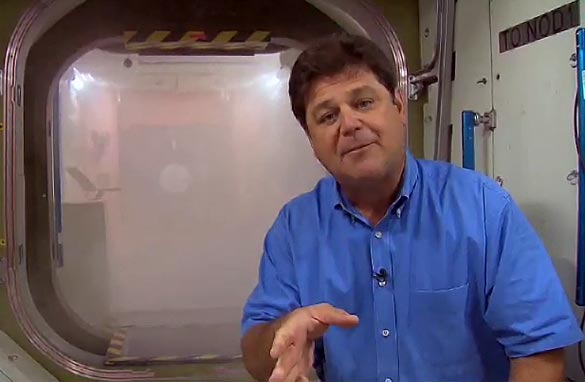 (CNN) – NASA is scrambling to deal with a rare emergency on board the International Space Station. Two spacewalks are scheduled to fix one of the station's two cooling systems that failed over the weekend. NASA officials say crew members are in no immediate danger, but the malfunction leaves the space station with just one critical cooling system in operation

Right now, a future space station crew here on Earth is training for worst-case scenarios when they're 220 miles up in space. One member of that crew is our very own astronaut Cady Coleman, who we've been following ahead of her mission to the International Space Station later this year. John Zarrella caught up with her to see that emergency training firsthand for our ongoing series, "Counting Down Cady." Watch

(CNN) – The all-veteran, six-astronaut crew of Space Shuttle Atlantis is slated to blast off today for a 12-day mission. NASA says the weather looks good for the 2:20 p.m. ET launch. There are three spacewalks planned during this trip to the International Space Station (ISS).

One person who will be watching as Atlantis takes off is our very own astronaut, Cady Coleman. We've been "counting down Cady" ahead of her mission to the ISS later this year. Cady was there, in-person, when the shuttle Discovery went up last month. Our John Zarrella followed her as she toured Kennedy Space Center (KSC) with two VIPs – her husband Josh and 9-year-old son Jamey.

Don't miss: Read Cady's blog about her trip to KSC