(CNN) – A black Agriculture Department employee who resigned after a video clip showed her talking about a white farmer said Tuesday her remarks were taken out of context.

Shirley Sherrod, the department's former state director of rural development for Georgia, told CNN on Tuesday the incident she discusses in the clip took place more than two decades ago - and she recounted it to an audience to make the point that people should move beyond race.

"I was speaking to that group, like I've done many groups, and I tell them about a time when I thought the issue was race and race only," Sherrod told CNN's "American Morning" from her home in Albany, Georgia. The incident took place in 1986, while she worked for a nonprofit and before she worked for the USDA, she said. "I was telling the story of how working with him helped me to see the issue is not about race. It's about those who have versus those who do not have."

Sherrod resigned Monday after conservative media outlets aired the video, in which she says she did not give the white farmer "the full force of what I could do" to help him avoid foreclosure.

James Peterson, assistant professor of English and Africana Studies at Bucknell University, also joined Tuesday's American Morning to discuss Sherod's resignation. Peterson says this is especially ironic given the recent controversy surrounding the NAACP and the Tea Party. Although he condemns Sherrod’s statements, he believes that the video was likely taken out of context. Watch

END_OF_DOCUMENT_TOKEN_TO_BE_REPLACED 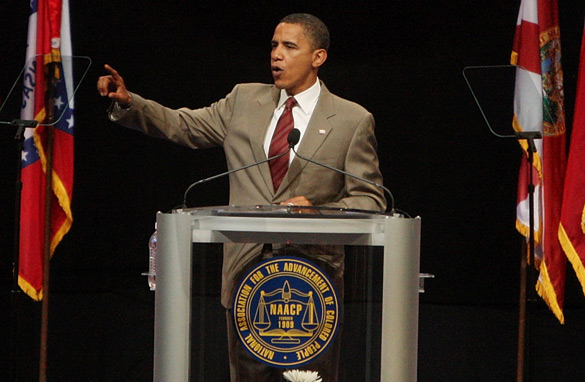 In this file photo, then-Senator Obama speaks to attendees at the 99th annual convention of the NAACP July 14, 2008 in Cincinnati, Ohio. (Getty Images)

President Obama will be in New York tonight to address the NAACP convention, which marks their 100 year anniversary. It's a major address by the nation's first African-American president.

Just last year as a candidate, Barack Obama was both deferential and defiant before the civil rights group.

"I know there's some who been saying I've been too tough talking about responsibility. I'm here to report I'm not going to stop talking about it."

Taking on some of his African-American critics, President Obama delivered a message of tough love, echoed just last weekend in Ghana.

"We all know that the future of Africa is in the hand of Africans."

The historic election of the United States' first African American president highlights the NAACP's role in fighting for equality and opportunity.

NAACP President Ben Jealous says, "This is a big step that we've taken, having a black family in the White House, ending that 233-year-old color barrier. But there's a lot more work that needs to be done."

This after former President Bush kept the NAACP at arms length, declining their invitations to address them for 5 years.

Commentary: The NAACP at 100: Much more work to do

What do you think? Has President Obama met the Black community's expectations? What is the future of the NAACP? Has it achieved its goals? Tell us your thoughts.

5:44 pm ET February 16, 2020 RETWEET
RT @Laurie_Garrett: @AliVelshi New: My take on how tightly the official tallies of the #COVID19 epidemic in China have tracked with politic…
alivelshi