Here are the top stories we’ll be breaking down for you this morning:

Breaking news: The Taliban is reportedly claiming responsibility for a suicide car bombing this morning near the Indian embassy in Kabul. At least 12 people were killed and 60 were injured in the attack. The explosion shattered car windows and knocked down walls. Paramedics are digging through debris searching for survivors. Read more

Deciding the next move in Afghanistan… An official request for more troops is now on President Obama's desk. It comes from his top general. Our Barbara Starr is live at the Pentagon where there are new questions this morning about the president's approach to the war.

And Washington is still looking for a fix on the make or break push for health care reform. We know insurance premiums and co-pays are going up, but what's the reason? The cost of care or greedy insurance execs? One case in Maine is taking that question to court. CNN's Jim Acosta has that story.

Here are the top stories we'll be breaking down for you this morning:

A CNN exclusive: Defense Secretary Robert Gates and Secretary of State Hillary Clinton sit down for a rare joint interview with Christiane Amanpour. Both Cabinet members insist that our troops are staying in Afghanistan. Our Barbara Starr is live from the Pentagon with insight on the interview. Read more

David Letterman's first show since admitting he had sex with members of his staff – The Late Show host publicly apologized to his wife and staff. It was part comedy, part crisis management. Our Alina Cho has the report. Read more 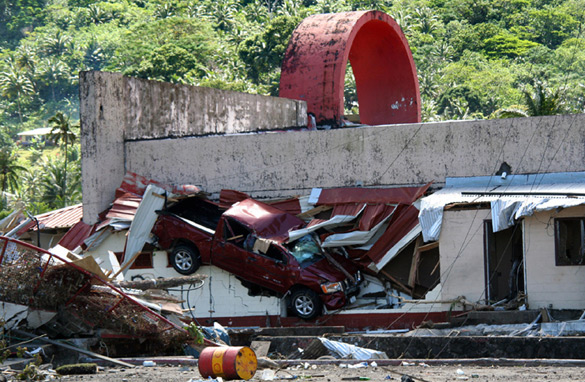 This photo taken on September 29, 2009 after an 8.0-magnitude quake and tsunami struck in the early morning offshore shows a damaged building and truck in Pago Pago, on American Samoa. (JOHN NEWTON/AFP/Getty Images)

Here are the big stories we'll be breaking down for you this morning:

A setback for the president and his plans for a public option in the debate over health care reform. A key Senate committee rejecting two Democratic proposals that would create a government-run insurance program to compete with private insurers. Does this mean a public option is no longer an option for the White House? Read more

An urgent summit meeting in Washington to address the dangers of distracted driving. It will focus on everything from texting to talking on a cell phone while behind the wheel. And what kinds of laws are need to keep drivers safe. Our Jason Carroll is following developments for us.

Shorter summer breaks. 9-hour school days. Kids may hate it but would you support more time in school? The president argues American students are way behind, compared to students in other countries and longer school days and a longer school year is a way to level the playing field. What do you think? Sound off below.

9:13 am ET October 19, 2021 RETWEET
RT @BhadeliaMD: I have news for people who are looking at the unfortunate loss of Colin Powell as a sign that covid-19 vaccines are not wor…
alivelshi

9:13 am ET October 19, 2021 RETWEET
RT @JoyAnnReid: General Colin Powell’s death is so shocking and heartbreaking. He had some tough moments around our wars, but was a fundame…
alivelshi

9:13 am ET October 19, 2021 RETWEET
RT @MSNBC: "We've been going two steps forward and one step back on climate for decades now. The latest below from Senator Manchin is the l…
alivelshi